Kastellio Vaughn, who was convicted on burglary and break-in charges in 2019, fears for his life in Elmore Correctional Facility in Alabama. When twins Kassie and Kascie visited their brother, they said he was unable to walk and lost a significant amount of weight. Kassie Vaughn received disturbing pictures from an unidentified inmate of her brother slumped over, emaciated with a large undressed wound. Vaughn had to be transferred to Staton Correctional Facility’s Medical Observation Unit. Kassie Vaughn shared the photos of her brother on Facebook to bring awareness to his health conditions, but Alabama Department of Corrections hasn’t responded to these recent allegations. ABC News (Sep. 26, 2022)

Nearly 2,000 people in Mississippi and Louisiana serving long or life sentences were labeled as “habitual offenders.” A change in Louisiana law allows for claims based on ineffective counsel to apply to sentencing not just verdicts. An investigation by The Appeal, found that the nearly 30-year-old policies still punish people for small crimes. The Appeal (Sep. 26, 2022)

Albion Correctional Facility, a women’s prison in New York, has been sending their disabled inmates to solitary confinement as punishment. One of the inmates was sent there for 15 days for getting into a fight. Under the Humane Alternatives to Long-Term (HALT) Solitary Confinement Act, prisons shouldn’t have sent her there because they are not allowed to hold people with physical and mental disabilities for a long period of time for any reason. The Department of Corrections and Community Supervision runs the state prison system and has sent hundreds of people to solitary confinement and hasn’t been complying with the law. New York Focus (Sep. 26, 2022)

Cleveland spent at least $7 million on 1,500 surveillance cameras to deter crime or apprehend suspects since 2007. Unlike other cities, Cleveland officials refuse to share where the cameras are and how they are used. The city does not have policies aimed at balancing transparency, privacy, civil rights and community safety. In Baltimore and Oakland California camera locations are disclosed and citizens vet how police use surveillance technology. The police department has not provided a draft policy on how it will release records, public information and data. The Marshall Project (Sep. 29, 2022)

At Western Missouri Correctional Center inflation has weighed on many prisoners. Inmates have reduced the number of calls they make and shortened the length of their conversations in order to save money. They also have been going without toothpaste and instead using soap and mouthwash. While the inmates are battling inflation, they have turned to buying and listening to music to cope with their emotional distress. With no outside support for some inmates, they have not been able to afford hygiene products or medications. Prison Journalism Project (Sep. 26, 2022)

Louisiana officials will incarcerate about two dozen children in the coming days inside Louisiana’s State Penitentiary, the infamous Angola. Children 10-years-old and up with a history of assault may be transferred from their current juvenile correctional facilities. Louisiana law clinics and the ACLU sued to try to stop the transfer of children and argued that keeping them in an adult prison was unconstitutional and psychologically harmful. Chief District Judge Shelly Dick reluctantly signed off on the plan. Mother Jones (Sep. 27, 2022)

Regulations to combat the severe drought in California are being used to control prisoners. Prisoners have been forced to work for showers. Governor Jerry Brown made an executive order that called for a 25 percent reduction of water usage on a statewide level which is causing prisons to conserve water. San Quentin State Prison issued a bulletin imposing water restrictions. They limit showers to three times a week and for five minutes. Those incarcerated who have chosen to go to school or work a non-CDCR approved job are restricted to three five-minute showers a week. The Nation (Sep. 27, 2022)

Bryan Hickson and Patricia Soto found out they were having a baby boy. But two days later, they received a call that their child would be removed from their home. Massachusetts’ Department of Children and Families, the state’s child protective services agency, informed Soto that they were taking custody of the child. Both thought it was a mistake, but because Soto had history with the Department of Children and Families (DCF) because of allegations of domestic violence between her and an ex-partner back in 2018. This raised the question of why Hickson couldn’t keep the baby. DCF declared he wasn’t present. So they were forced to give up custody. Mother Jones (Sep. 26, 2022)

prison guards to be replaced with drones

All 50 states have struggled to bring in prison guards which has driven them to start thinking about surveillance technology. Officers have been frustrated with low pay, violent conditions, long hours and isolated work locations and end up quitting. These factors are driving the state of Nevada to use drones in the prison and surveillance bracelets to monitor the people serving time there. Governors in Florida and West Virginia have declared states of emergency due to staff shortages. The Nevada Department of Corrections plans to move forward with surveillance technology. POLITICO (Sep. 28, 2022)

A new report shows that Black people in the U.S. are seven times more likely to be falsely convicted of a serious crime than white people. Data gathered from exonerations for murder, sexual assault and drug crimes from 1989 through August 2022 highlighted significant challenges in obtaining national criminal justice statistics. Counties are supposed to report the crimes rather than the state but this leads to misreporting and lack of accountability. Dramatic racial disparities have made a significant impact to the point that innocent Black people also spend a significantly longer time in prison before exoneration than white people. Yahoo! News (Sep. 27, 2022)

Nearly 20 years later, one of two living members of the “Texas 7” prison gang convicted in the murder of a North Texas police officer in 2000, could get a new trial due to a judge’s anti-Semantic comment. Randy Halprin was convicted and sentenced to death in 2003 in the killing of Irving police officer Aubrey Hawkins. Witnesses have testified that the judge in Halprin’s case, Vickers Cunningham, was known to make racial and anti-Semitic comments against Halprin. WFAA (Sep. 27, 2022)

tell us your story here 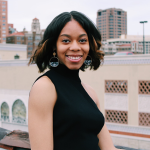 Lonyae started working as a Research and Reporting Intern for The Des in August 2022. She is a senior at Texas Christian University, pursuing a degree in Journalism with a minor in Writing. At The Des she is most excited for working with new staff, expanding her storytelling skills in her writing as well as expanding her knowledge in the criminal justice system.